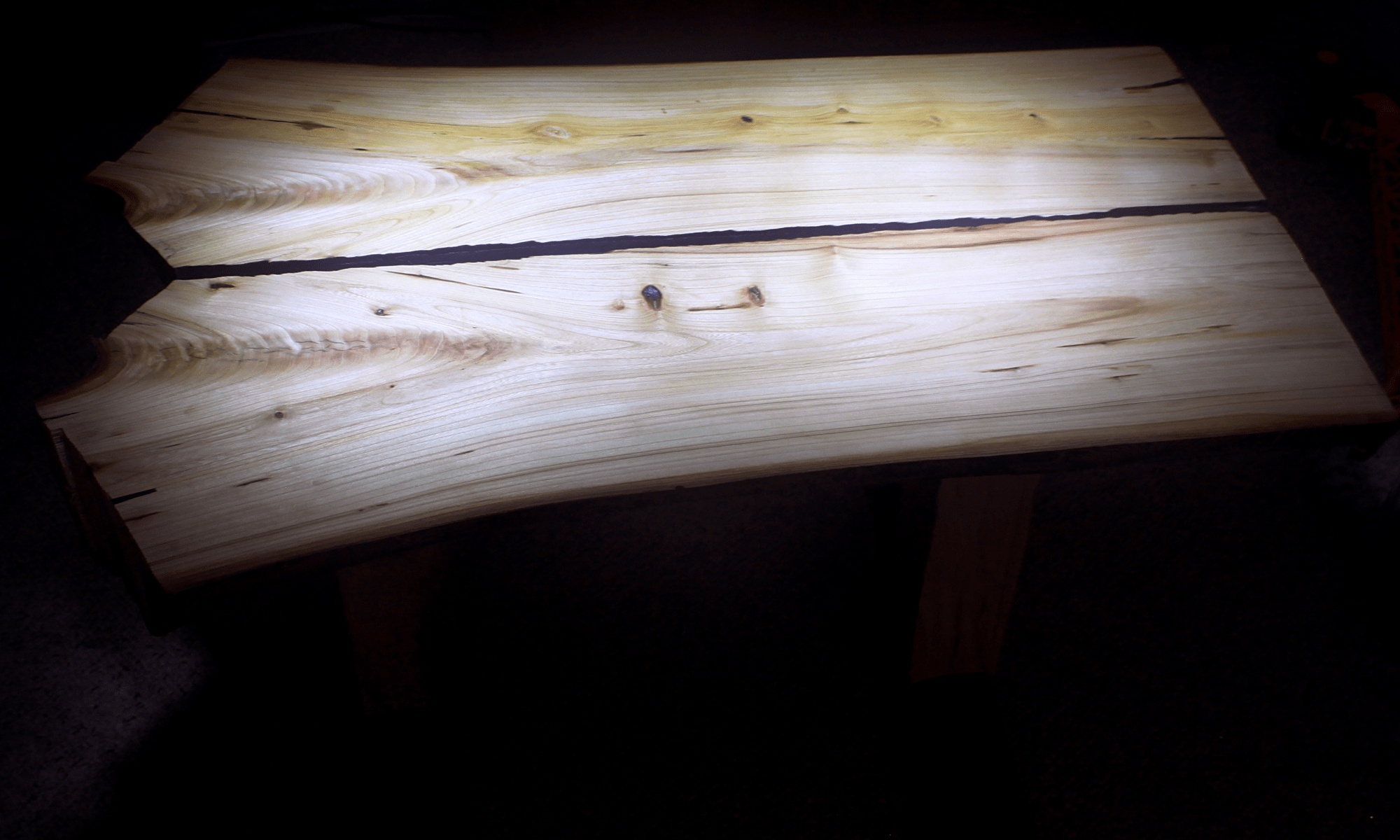 A similar theme here where I was looking over the wood from my friends disposal bin and trying to see if there were any interesting pieces that I could save. 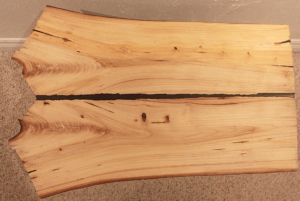 This table was actually three pieces at first which came from the same tree.
The only thing that attracted me at first was the shape of the piece that would become the main service of the table. I like the way it flared out at the end where I assume a branch had grown out of the main trunk.
Of course when I saw the pieces as just logs I knew that I somehow had to section them so at least I could have a flat surface for a table. But at the time I had no idea of how I was going to do that.
Sure I could take it to a professional with a wood mill but the one that I use is about an hour outside the city and it seemed like quite a drive and a lot of expense for maybe a single cut.

So when I got the logs back home I actually let them sit for a couple weeks while I kept looking at them and figuring out what to do. I knew I had to let them season because I wanted to have as much moisture out of the logs as possible before I started to work with them.
Well push came to shove and before we went away on a 2 Week family road trip down east I decided that I need to at least rough saw them so that they would have a better chance of seasoning for the time we were away. That meant I had to figure out how to rip them down their length.
I had previously used my electric chainsaw to cut A previous piece into two but this was a bit different as it required more patience because the chainsaw doesn’t usually cut in that direction of wood.

I managed to get everything rough cut and stacked before we left.
When we came back the pieces had dried quite a bit because it was very hot this past summer. And so the next step was to remove some of the bark for the pieces I would use for the legs. I cut the bark again down the length of the logs trying to keep as much wood as possible. As I did this I ended up keeping the bark shards which you can see in another product I turned into some very interesting candleholders
So now I had an idea for the top and the legs but I wasn’t sure how I was going to finish it off where it met the floor. 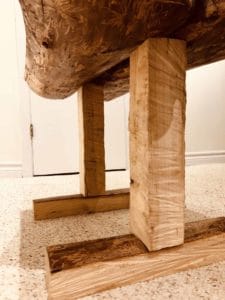 It took some experimentation and test fitting a few different sizes of material but eventually I found something that I think works really well with the scale of the table.
For the top I used my planner to get a relatively true surface on both of the pieces before I used epoxy to glue them together.

But the real tough job was actually cutting mortises and tenons for the legs and feet. That alone took me almost 2 weeks because where the legs meet the feet is a curved surface and most times the shoulders of a mortise are flat so I needed to use a router to transfer the shape of the feet to the legs. Oh and a few choice words to describe what I was feeling during the process.
After I glued everything up I finished the top with Osmo non-toxic wood wax from Germany and now it’s ready for the right home. [edit – its actually found a great home in a Dental office waiting area and it really makes a great statement!] 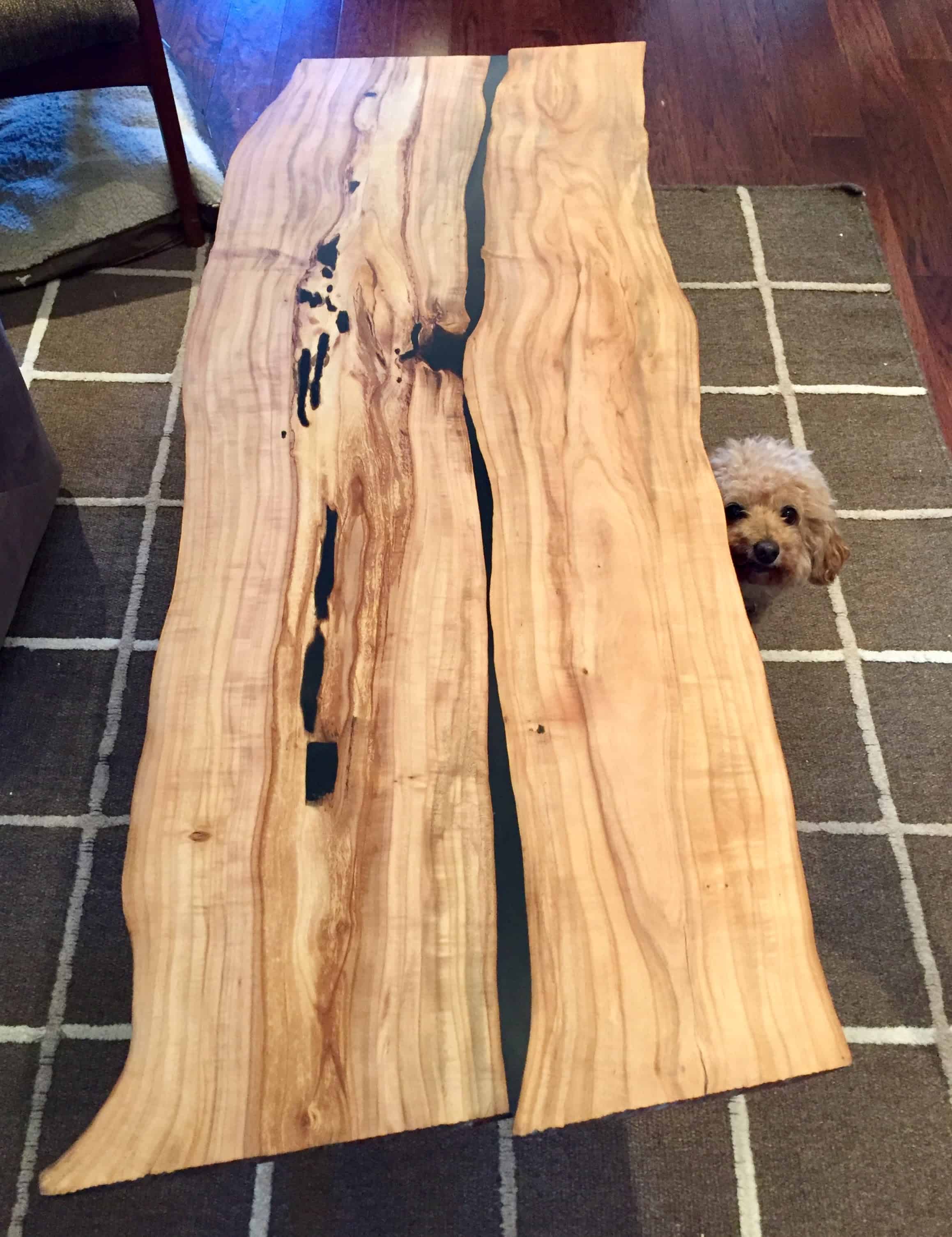 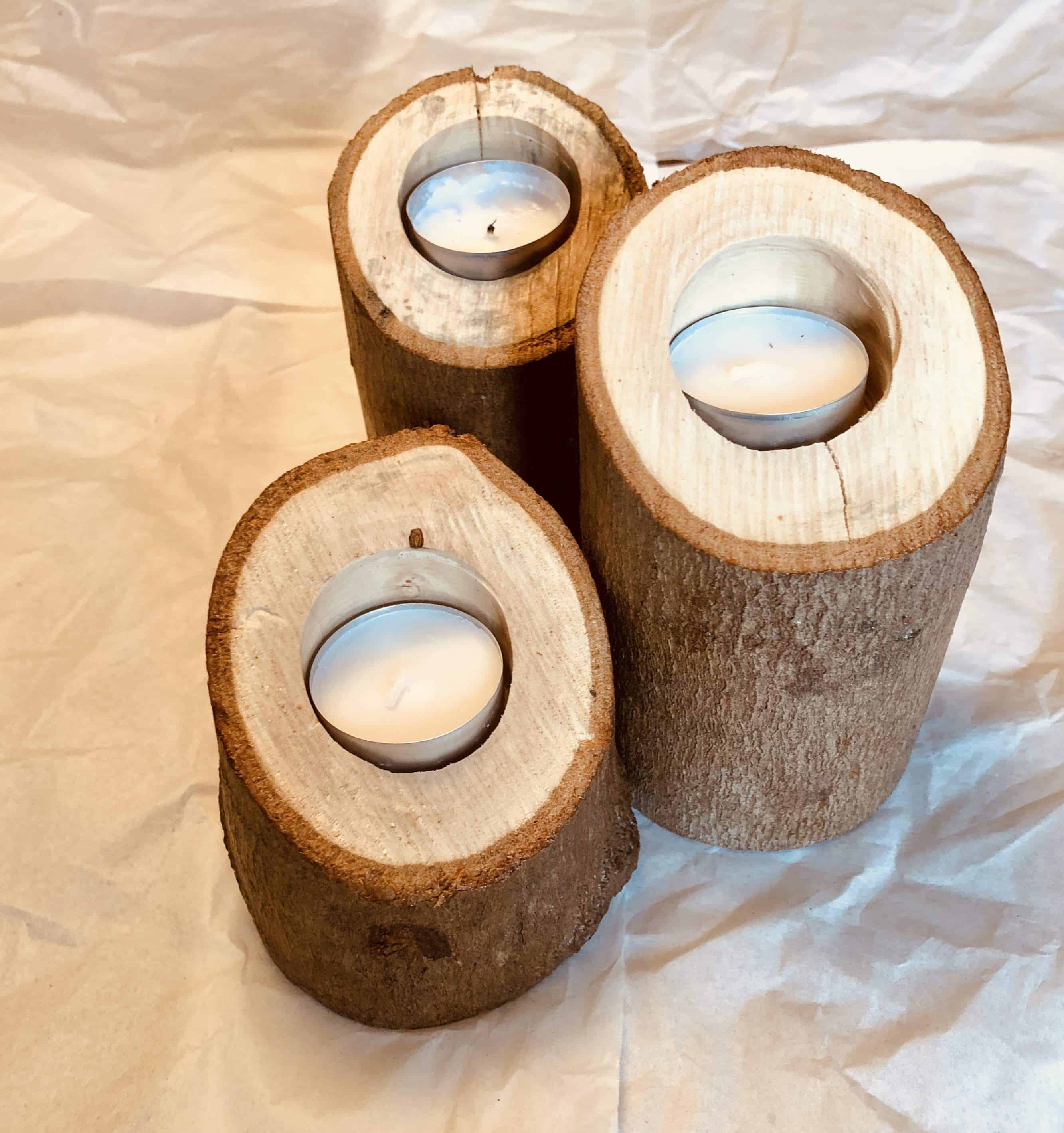 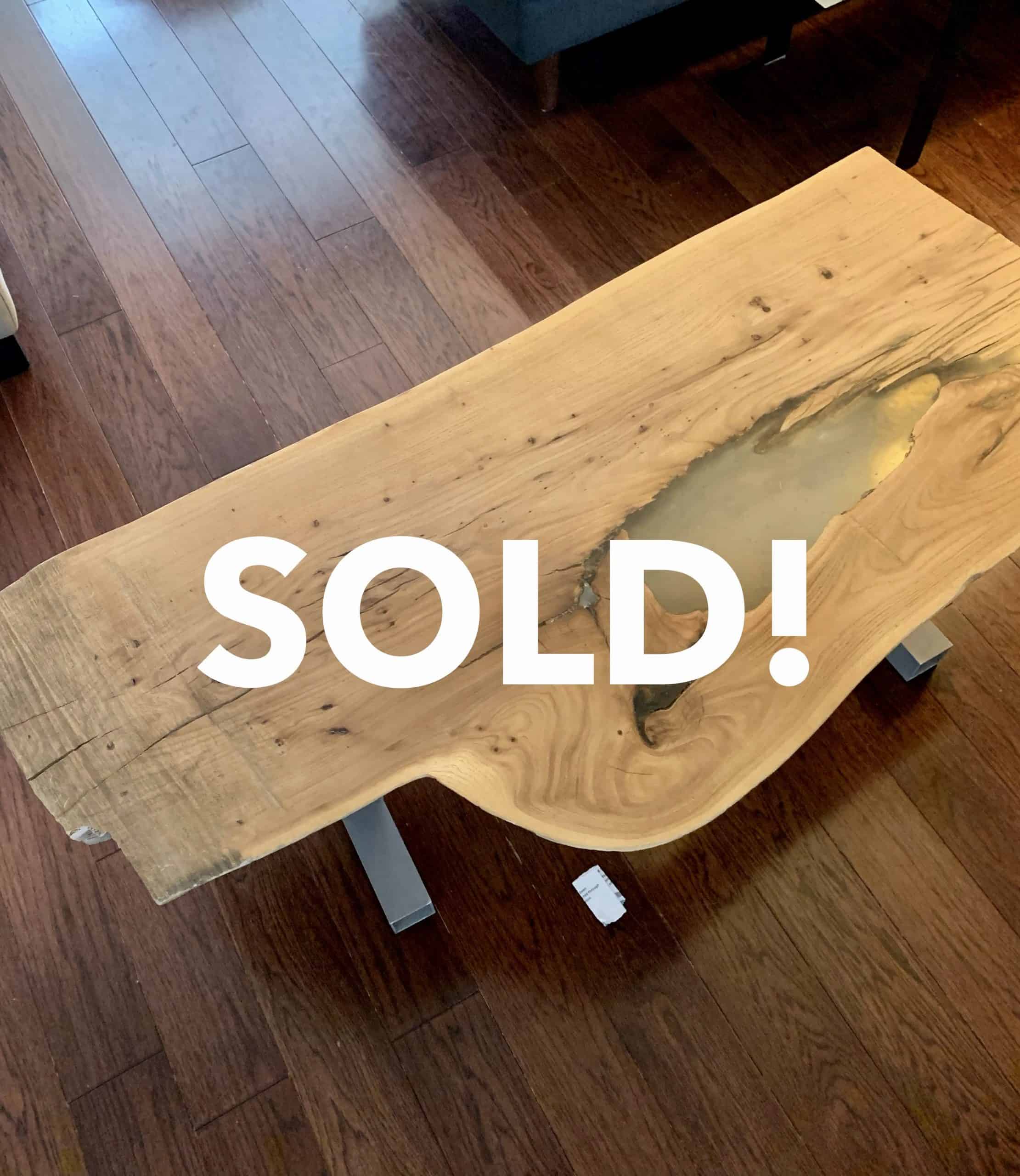 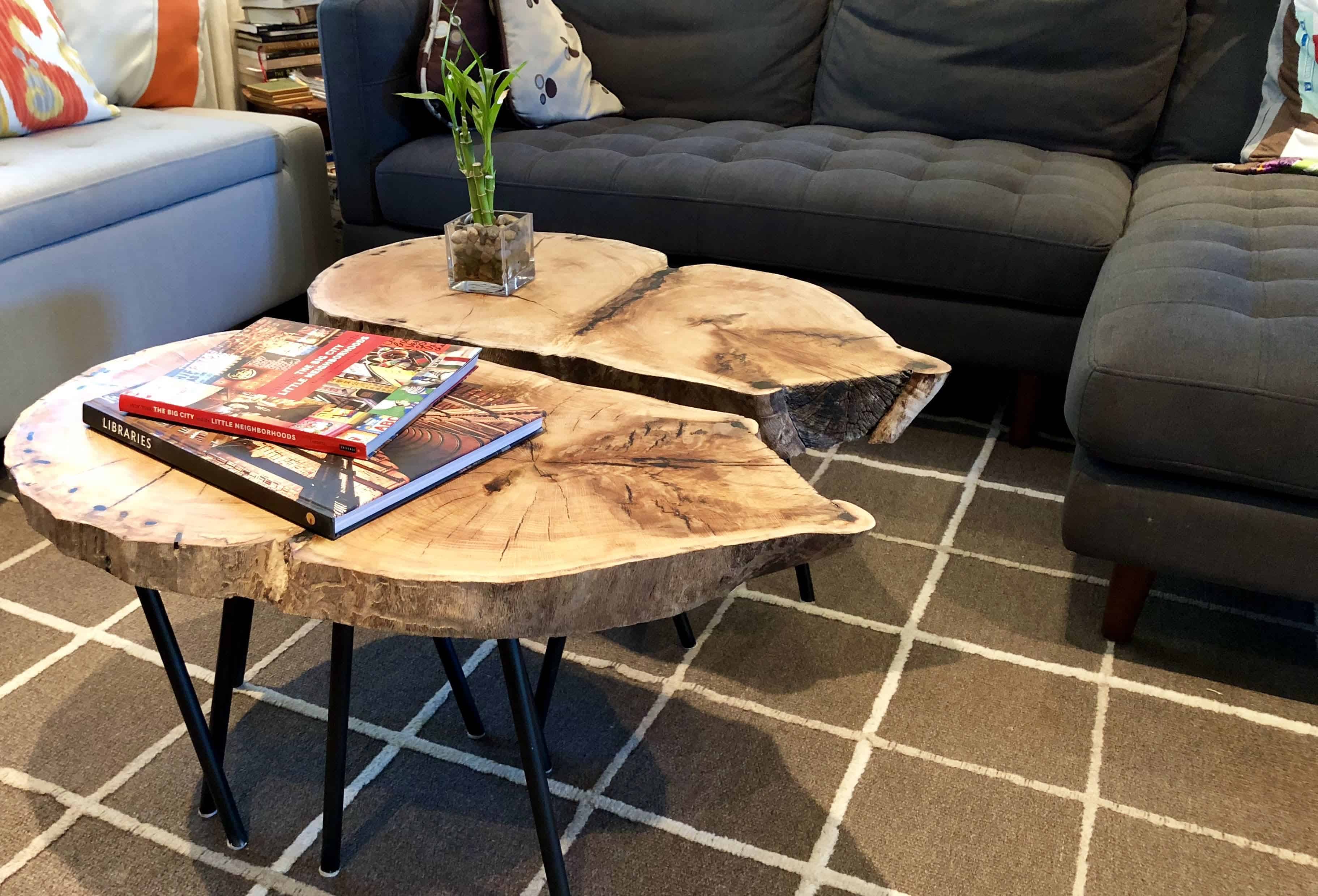 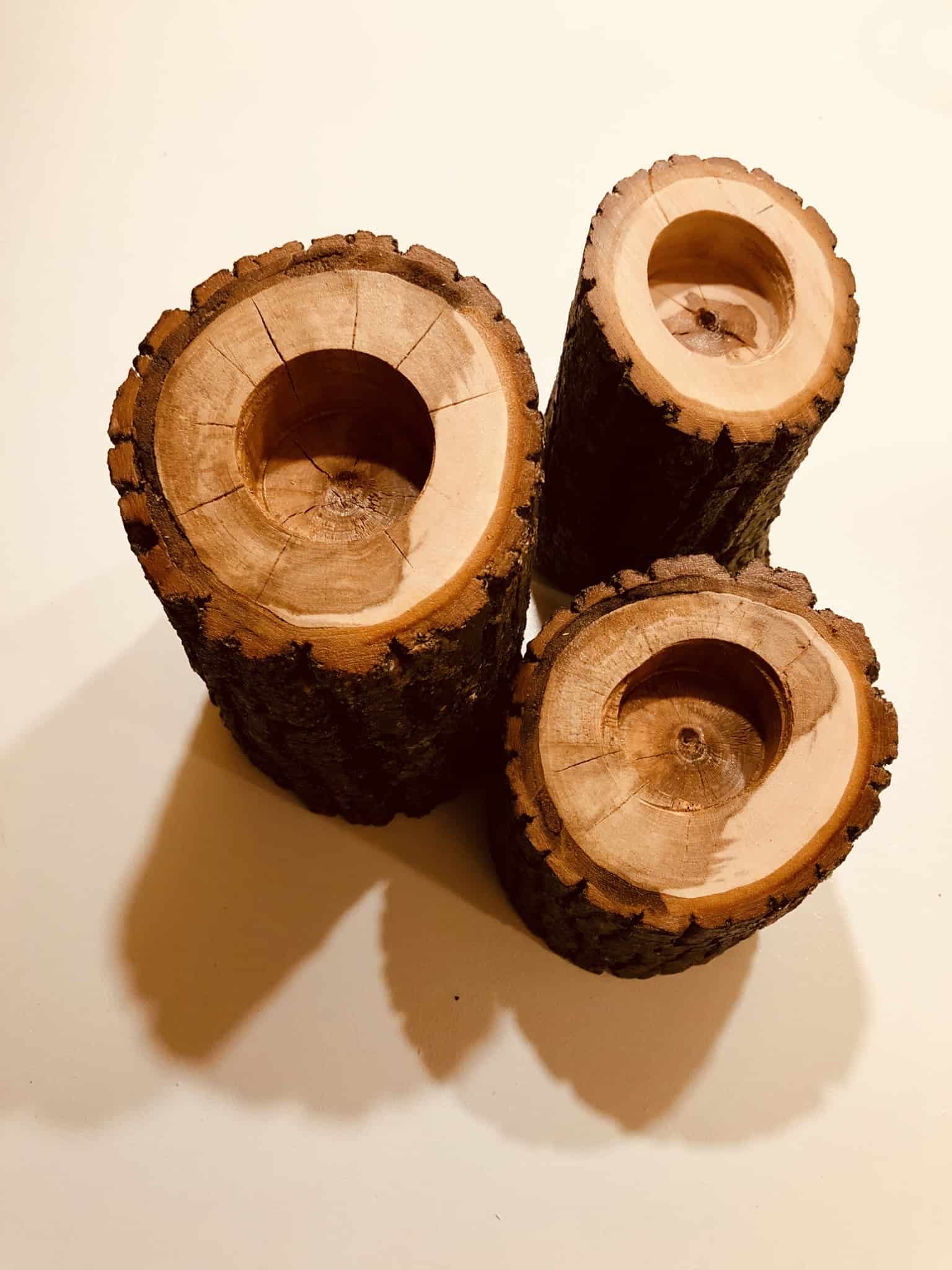