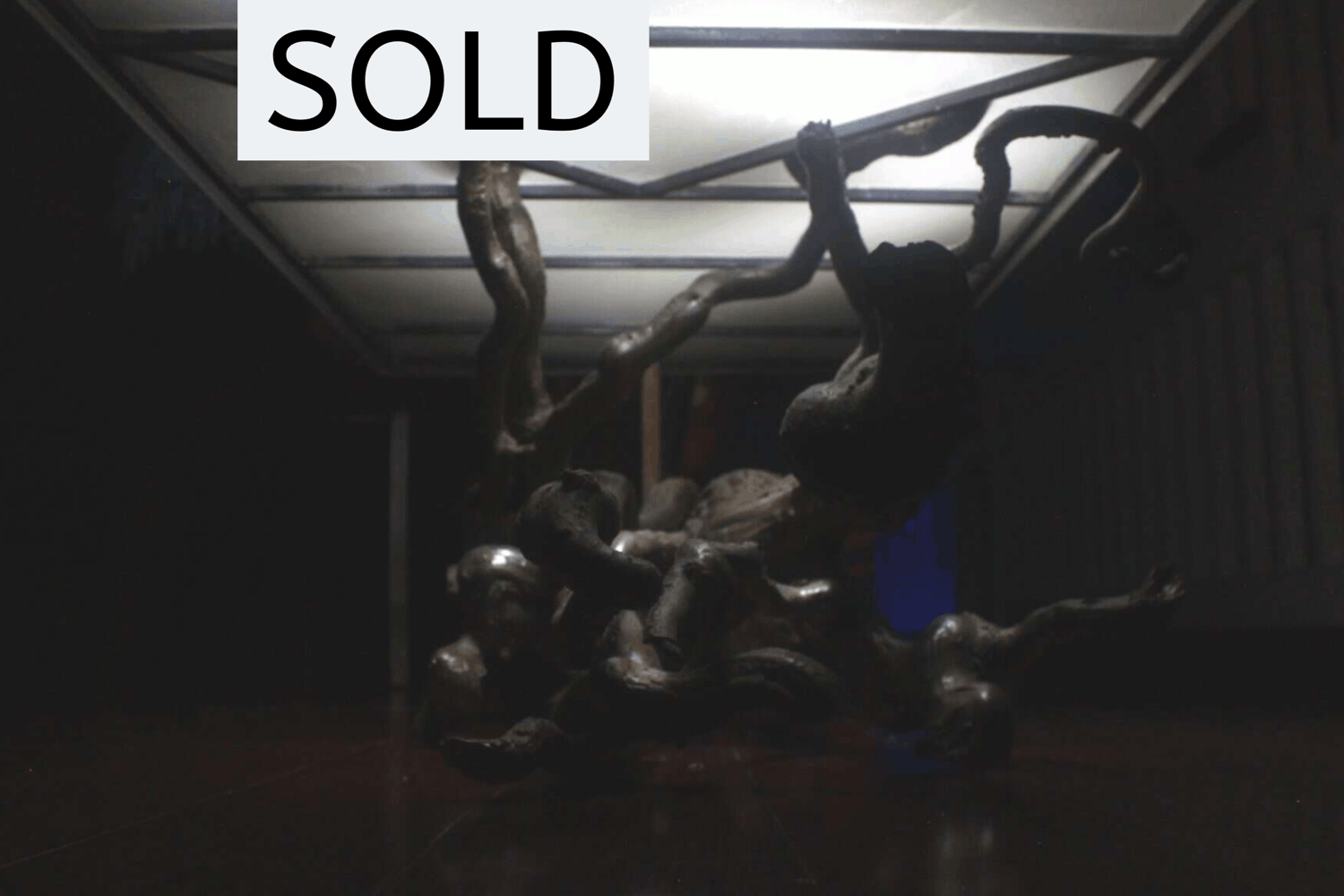 Sometimes you see something and an idea begins to form in the back of your mind. It sometimes shows up when you are daydreaming or just before falling asleep. You have no way of knowing where it’s going to go but somethings tweaks your interest and imagination.

That’s what happened when our Corkscrew Hazel Bush died a few years back. We left it bare because it was a great lattice to put Christmas lights on and looked especially interesting when it snowed.

But when it became so dry that branches started to just snap off we realized we needed to take out the main trunk. It was pretty easy to take out and after I got it out of the ground and it was laying in the grass I thought , “Hmm-what an interesting shape. Maybe we don’t have to throw this out and I could do something with it?”

That led to about two years worth of thinking and planning for how to use this formerly dumpster found chunk of wood for something interesting.

At first I thought it could be a pretty interesting chandelier but the size meant that it would only fit in houses that had very high ceilings. And on top of that figuring out a way to embed the wiring prove to be a challenge. So the piece sat for a few more months on my deck, through the rain and the snow before I turned it a few times and thought about using it as a support for some sort of table surface.

Now here comes the interesting part- I went to a woodworking shop with a picture of the wood looking to get some advice from some of the old-timers that usually hang around during the day. I started talking to one of them and showed him the picture and explained to him what I wanted to do.

“Won’t work,” he said. He explained that it was impossible and there would be no way for the wood to support the table surface. Of course, that just got me more interested in exploring how something this “un-linear” and organic could be used as a coffee table.

The first thing to do was to stabilize the wood and the Wood Stabilizer product I used really strengthened the wood so that it was now looking much stronger and solid.

Moving around I was able to see that naturally there were some branches that could contact the ground which led to one of the branches sticking up in the air.

Now normally I would’ve just cut this off but again going with the “interesting” theme and the contrast I wanted to bring between the flat table surface and organic shaped branches I thought it would be possible to have the branch extend through the surface of the table like it was growing out of it.

The only way I could think of to do this would be to cast the top out of epoxy resin around the branch rather than try to use wood or even glass. The resin also give a good opportunity to structurally attach to other areas so the table would be supported in more than one place.

This led to a long line of experiments where I thought about building small forms for each one of the areas the resin would contact then placing those into a larger form for the table or actually just building a form where the branch poked through and casting everything upside down which is what I ended up doing.

The advantage of this is that I could just pour several layers of epoxy into the form and build up the thickness I needed. The disadvantages when I took the form off the epoxy had taken on all of the imperfections and indentations of the form-work. So that had to be sanded smooth and all of the small gaps filled before I could go any further.

The real truth was slightly different

One thing I need to get out in the open is that when I was thinking about using the epoxy, I thought it would be more rigid to use as a table top then it actually turned out to be. Which meant that I needed to retrofit a steel frame around the edges and through the center of the table for support otherwise the table top wilted like an old flower.

After visiting Metal supermarket to get my hot rolled steel sections, I measured and cut them to length and brought them to my friend John the welder who put one side together with stick Welder. I actually could not have the entire frame welded because once it was together I would not be able to place it over the wood base and attach it to the bottom of the table surface.

So the way I got around that was drilling holes in both the crosspiece and the edge piece to except a small steel rod and then I just epoxied everything together including the metal frame to the underside of the table.

I know this explanation is getting really long but the process to get here took about four months of working on it then thinking about how to go through the next step then fixing some mistakes and generally experimenting to see if I could pull this off.

When I got the frame fully installed it made a massive difference to stability of the table. At this point, there were only a few more things left to do. One of them was to strengthen the area where the branches attached and poke through the epoxy as it was flexing somewhat even in between the cross supports. So I templated and cut some diagonal cross pieces and drilled and pinned them in place before finally attaching them to the bottom of the table with some more epoxy.

Then I could focus on the filling and sanding of the table top surface. I’ll spare you the details but this took days and I ended up sending it to 2000 grit to get a very smooth surface.

The last thing to do was make some fine-tuning adjustments so that the table would be flat and parallel to the floor and then putting several coats of high durability your thing on the table top surface to protect it from scratches.

So there you have it. I don’t imagine this is a very common project and anyone in their right mind wouldn’t attempt this. And I fully realize that it isn’t everyone’s cup of tea to have this in their home. It is a bit raw and would likely compete with other furniture.

However it just goes to show you when you get an idea in your head it can be very difficult to shake.