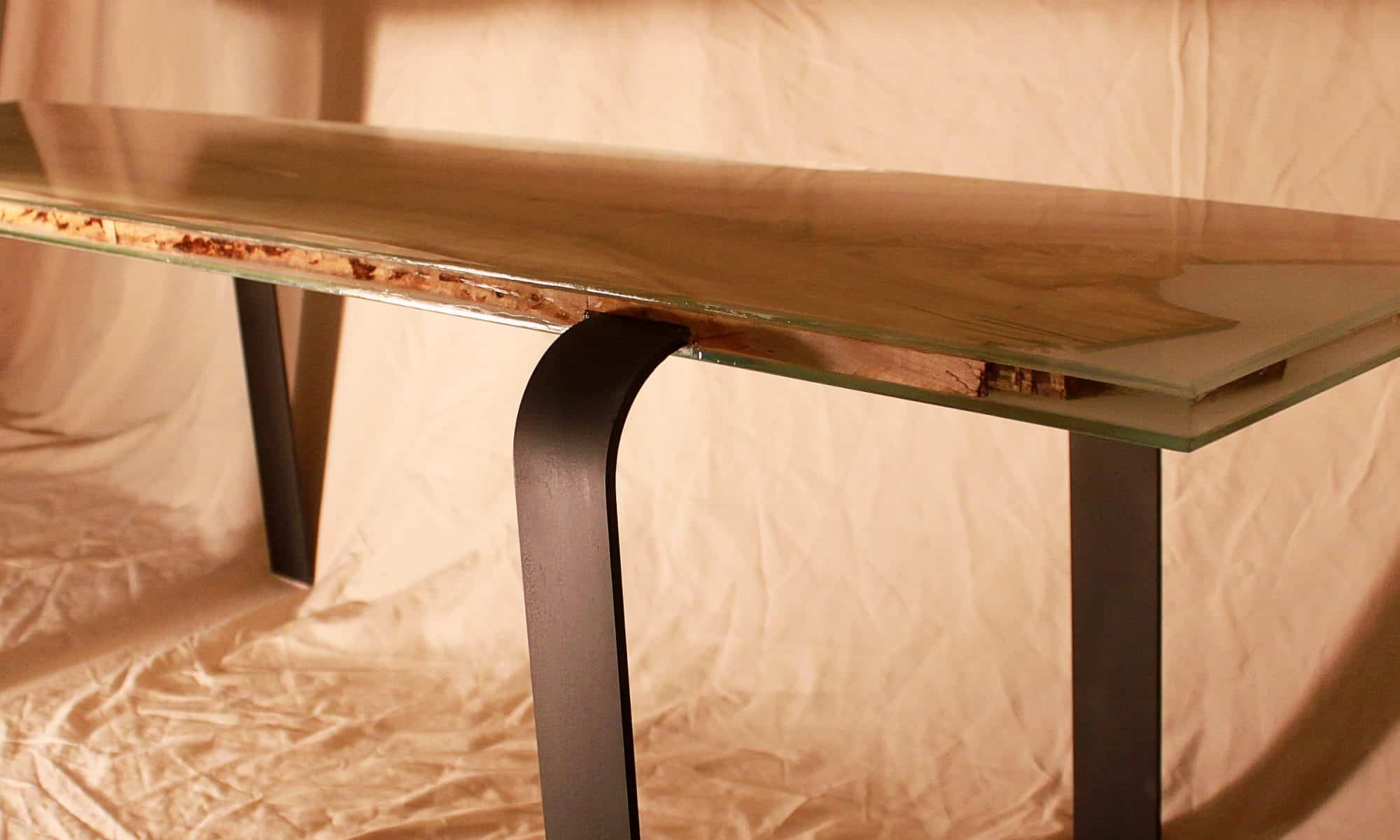 Sometimes you come across raw materials without even searching. And they happen to be something that you might never think of using – until you have them at hand and the wheels start turning….

That was the beginning of this project- a quick trip down the road to mail a letter turning into a quick ‘dumpster dive’ (well not really a dumpster.) More like the edge of a neighbors yard, where I found two long thin pieces of tempered glass that may have come from a shelving unit. They looked pretty clean and since they weren’t broken, they were shouting at me to take them home.

At the time, I had no idea what to use them for, but since they were relatively compact, I could store them beside the dryer for a while as I considered how I could possibly incorporate them in a project. As it was early winter, it made sense to store them as I was working on some shop furniture which was taking up the rest of my time.

I very seldom use glass as most of the time I’ve found that it requires custom cutting but most of all hides the texture of the wood surface.

However like most ideas I have for pieces, the more they sat around, the more my brain processed different ways to put them together. I think maybe the fact that just at the start of the pandemic my brain was trying to make sense of what was happening and started recalling images of my early science training and brought glass together with lab work and I thought of examining specimens between glass slides under the microscope.

Staying very close to home (and having a pile of various drying species of wood) made it easy to chose what to use. I thought if I could slice one of the pieces down the middle (like book matching, or butterfly) then I may be able to sandwich in the center with the glass providing structural rigidity. 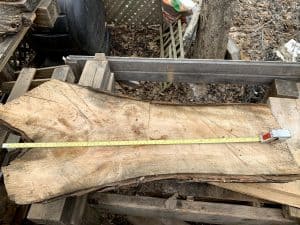 The chainsaw proved once again the tool for the rough work, and then I hauled out the router sled to take the slabs close to the finished thickness.

I knew that given the thinness I was going for I couldn’t use a traditional leg which would’ve attached to the bottom surface because having a strong and reliable bond to tempered glass would’ve proven difficult. I messed around with the idea of somehow having a metal band that went around the sides and top and bottom then connected to a leg which led me to the more simple solution that I ended up going with. 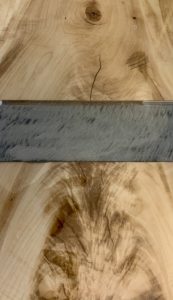 I managed to get each one of the book matched slabs into my thickness planer and got them down to about 3/4 of an inch thick. At that point I just sanded them with my random orbital sander to about 400 grit because I knew that I was going to be embedding them in Epoxy and sanding any more probably wouldn’t make a big difference

The question I was wrestling with was how to laminate the glass onto the slabs without getting Epoxy all over the outside faces which would’ve made things extremely difficult to clean up. On top of that I had to get the legs set up and properly positioned so that when I did the pour it also bonded the legs to the blank in the right  location. 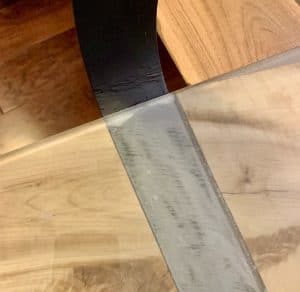 I ended up doing it in several stages. I laid out the slabs end to end in the butterfly orientation you see now.  I left the dimensions about a quarter of an inch oversized in each direction so that I could use the glass as a template for the final length and width

Then I built a mold and laid the slabs down and poured Epoxy over the slabs with the legs in place to encapsulate them. I flipped it over and put a thin layer of Epoxy on the bottom surface and then carefully laid glass on that and weighed it down for a good bond. Once it cured I flipped it over and did the same to the top surface.

At this point it looked pretty close to being done and because the finished surfaces were glass I was pretty happy that I didn’t need to do any excessive sanding and apply a finish. But I was wrong….

I had to use a variety of different methods to trim back the wooden epoxy sandwich to the line of the glass. Initially I thought that a router with a flush trim bit would be the way to go but I was very hesitant about having a 20,000 RPM router bit coming in contact with the glass. So I used a multi tool cutter for the bulk of it and then hand sanded the rest down to the glass.

One of the mistakes I made was that I brushed on a thin layer of Epoxy on all the edges which didn’t give me the smooth clean line I was looking for. It ended up looking pretty wavy and didn’t really fit with the look of the piece.

Once again I had to sand back down to the glass and hand sanded up to 2000 grit. So much for not having to do a lot of sanding …

After spraying the legs flat black I put a thin coat of urethane on all the edges which not only protects them but gives a clean smooth finish that matches the sleek look of the table. 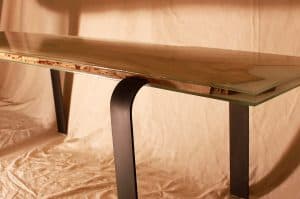 Looking at this coffee table in contrast to some of the others that I’ve done in the past, this one looks much less rustic and less massive but has a certain charm and function of its own.

Because most of the surfaces are glass it’s really resistant to surface scratches and the glass veneer seems extremely strong. Maybe I will experiment more with this idea of glass veneer and I’m already thinking of a few ideas to take it to the next level 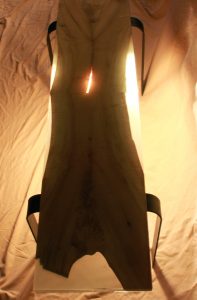